FOR A BETTER EXPERIENCE, KEEP YOUR BROWSER UP TO DATE. CHECK HERE FOR LATEST VERSIONS.

The frenulum is a small fold of connective tissue which serves as a bond between the tongue and the floor of the mouth and between the upper and lower lip and their respective gums. An underdeveloped or excessively short frenulum may cause disturbances in the functioning of these organs. 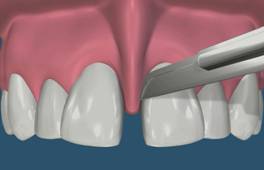 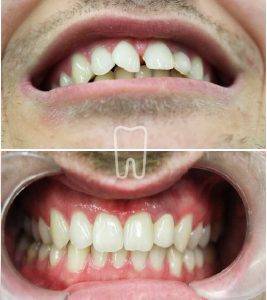 A low, thick upper lip frenulum can cause a diastema, that is, a gap between upper central incisors. If such a frenulum is surgically removed at an early stage, during the period of teeth and jaw development, the incisors will spontaneously close and the diastema will disappear. If the frenectomy is performed later, in a fully developed jaw, the patient will require orthodontic treatment in order to close their diastema. The teeth gap caused by a strong frenulum is much more common in upper than in lower teeth.

Do you have a question or want to make an appointment? We’ll be happy to give you advice and offer a solution. Contact us

A strong glottal frenulum may inhibit mastication or speech. This problem can easily be overcame by frenectomy.
The procedure, consisting of a small incision to the frenulum, is performed under local anesthesia. The patient receives several stitches which are removed after seven days.